The Wheel Turns Once Again

Agouro is a narrative game of inevitable prophecies, inspired by Tarot cards and dark fantasy stories like Kentaro Miura's Berserk and Netflix's The Witcher.

In Agouro, you'll perform a ritual to summon the story of a group of people whose lives are intertwined in the threads of destiny. Your decisions will shape the fate of the World, and also your own.

Agouro is played with between 3 and 6 players, and each ritual of play takes around 2 to 4 hours.

Players create protagonists by choosing a Path based on one of 20 Major Arcana cards, then use two standard decks of cards (52 cards, 4 suits, no Jokers) to bet in turns, creating scenes that carry the story forward and advance towards the culmination of the prophecy.

The prophecy is inevitable. You play to find out how it happens.

If you want a few more details on how it works and where the mechanics came from, I made this twitter thread to explain a little bit.

WARNING: For now, Agouro is only available in a playtest digital version. If you purchase it now, you'll get the finished digital version of the game when development ends.

Future planned updates include, but are not limited to:

If you'd like to give me feedback on your experiences playing or reading Agouro, or if you want to pay in R$ or trade a copy of one of your games for it, you can do so by messaging me on twitter @raulranma, or by sending an e-mail to raulranma@gmail.com.

The rules for this game are licensed under CC BY-SA 4.0. That means you can create new material based upon them if you wish, as long as you also publish it under this license and give appropriate credit. Table texture on the mock up pictures by Nathan Dumlao.

In order to download this game you must purchase it at or above the minimum price of $10 USD. You will get access to the following files:

Support this game at or above a special price point to receive something exclusive.

For every 10 copies of the game sold, I'll add 10 community copies here. If you can't pay for them, feel free to grab a freebie.

If there are no community copies left and you'd still like to get one, please contact me on twitter @raulranma - we can always work something out!

Hello! I was wondering if there were anymore community copies available? 🙂

Hello! I put up the 5 new copies from 5 new sales beforehand, so that you can get it. I'd love to hear your thoughts on it after your reading! Please consider rating it 5⭐ afterwards too ☺️

Thanks so much! I'll review it as soon as I can. 😊 Super hyped to play this. ☺

Also, is it possible to play the game solo? I'd be open to testing a couple solo playthroughs. 🙂 But I know it's intended for 2 - 6 players.

The rules weren't written to play solo, but I'm sure there's a way to do it. I might try and design that after the game as it is is fully playtested and working as intended, but for now I'll have to leave it in your hands to figure out a solution for that.

Awesome! You can count on me! 😊 I'll write my review after my playthrough and write some notes on how the solo play went.

Agouro is a storytelling game of occult fantasy, told through tarot cards.

The PDF is 90 pages, with lovely layout and extremely clean, easy to read, and well-organized text.

Right off the bat, there's a lot of little toggles. You can encourage or restrict content, GM or co-GM, and limit or expand the length of the game.

The game also has an unusual voice, using "we" instead of "you," and this gives a ritual feel to the instructions---which I'm having a hard time assuming isn't deliberate.

Character creation has some interesting complexity to it, in that choosing each character class (represented by a specific major arcana card) also removes another class from the selection pool. Character elements are also all non-mechanical, so while you're still making quite a few decisions during creation, they don't revolve around where you want to put a +1 or a +2.

Agouro has a lot of mechanics to shape its core gameplay, but they're all relatively simple and interesting and they connect together quite intricately. They center around the Wheel Of Fortune, which is basically a gameboard everyone can move a token around. Where the token lands determines what kind of scene is framed. Within that scene, everyone moves their protagonists freely until it comes time to resolve it, at which point the players choose how much of their character's safety they wish to wager, and draw cards from a series of sorted piles in front of them (ranging from mostly low cards to mostly high cards) with the highest card getting its player a benefit and the lowest card getting its player a penalty.

This definitely isn't a game that you play to win, but it *is* a game that you play to experience a compelling story, and it manages that in an interesting way. During character creation, you establish a prophecy, and during gameplay you fulfill it. The prophecy invariably comes to pass, but this frees you up to focus on how it does.

Overall, if you like storytelling games with gothic or occult notes, if you like lots of little subsystems, and if you like extremely well-made books, you should check this out.

Thank you very much again for your thoughtful reply! I'll make sure to work hard to polish the rough edges of this game before its full release 💖 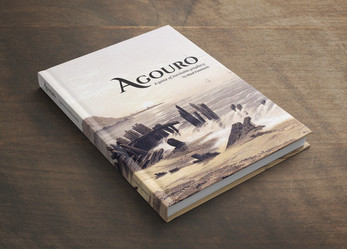 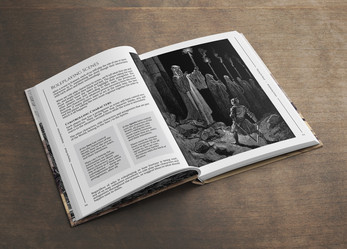 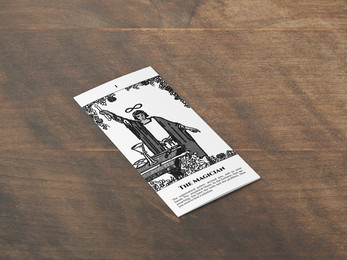 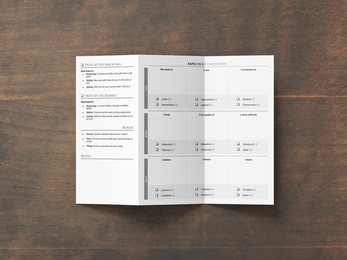